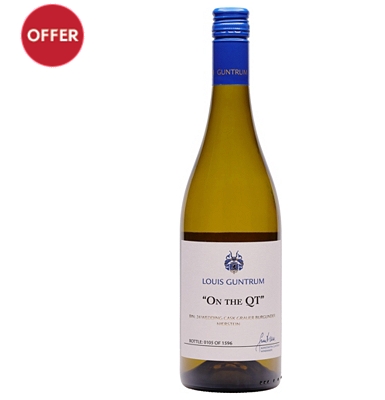 Perfect for serving with cheese and charcuterie or a grilled salmon salad
Buy 6 German wines over £5, get 20% off Offer ends 12/10/2021

In 2003 winemaker Konstantin Guntrum and his wife Stephanie were given a wedding gift by the winery: a 1,200-litre oak barrel. And it's in this that the Grauburgunder (Pinot Gris) grapes for the 1,524 bottles of this special cuvée were fermented.

Made by Louis Konstantin Guntrum in Nierstein, Germany


There are a lot of people called ‘Louis Guntrum’ in this business, it’s hard to keep up. But what this chronicles is the history, knowledge and passion that’s been passed from 1648 when the Louis Guntrum family settled in Rheinhessen, to Louis Jean George Guntrum who built the winery on the banks of the Rhein in 1923, to today’s owner, the 11th generation Louis Konstantin Guntrum. And it’s him who made these two unique “On the QT” wines of which fewer than 2,000 bottles of each exist...

One of the reasons why more of the unusual red blend cannot be produced is because the Cabernet Dorsa vineyard, which Konstantin leased in 2017, was ripped out after its first and last harvest of 2018. It was removed due to local land consolidation rules, but means there’s now one less vineyard in the world where the rare Cabernet Dorsa grape grows. The Dorsa is a hybrid of Cabernet Sauvignon and Dornfelder varieties and creates a dark, elegant, full-bodied wine that tastes of bramble fruit and blackcurrants, with complexity, structure and spice coming from the addition of 18% Merlot. Try it with pan-seared steak, slow-cooked stews and pasta tossed in a fresh tomato sauce.

One person who isn’t called Louis, is Stephanie. On the day that she married Konstantin in November 2003, the winery team presented the newly weds with a gift: a 1,200-litre oak barrel, to be used only for special cuvées. And the 2019 harvest of Grauer Burgunder (Pinot Gris), hand-picked from the picturesque vines along the river Rhein qualified for the ‘Wedding Cask’. There’s a charming character about this wine that comes from the barrel’s residual sugar – it ‘throws’ a bouquet of peaches, lemon zest and spice, and is the perfect match for cheese, grilled salmon, salads… and Stephanie’s roast chicken.

Meet the other Louis