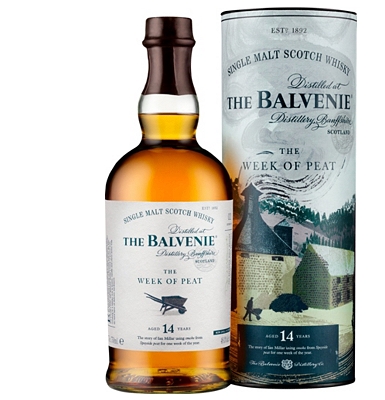 Honey, vanilla and citrus notes with an extra layer of smokiness

The name refers to the tale of malt master David Stewart and former distillery manager Ian Millar who used a week's gap in the production schedule to experiment with using Speyside peat in the barley drying process.

Bottle at a glance

Whisky made by the famous five

The Balvenie distills years of expertise, skill and ambition into each of its bottles. Craftsmen, passionate about making the best whisky possible, use their intimate understanding of materials and ingredients across five rare trades to produce its unique character.

Each year, barley used for malting is sown and grown on the nearby 1,000-acre farm and harvested only when the farmers feel it is ready. The Balvenie remains the only distillery in the Scottish Highlands to produce its homegrown barley for making single malt.

Also rarely found in Scotland is a working floor maltings. To ensure the whisky keeps its signature consistency, the barley is steeped in spring water sourced from the hills above the distillery, drained then spread across the floor. Malt men turn it by hand until the malted barley is ready for the kiln, where it is seasoned with just the right amount of peat.

The shape and size of the copper stills are critical to the flavour of The Balvenie in allowing the vapours more time to mix. If repairs are ever needed, the coppersmith 'sweetens the still' with juniper branches before whisky production resumes, all to preserve the stills' character.

How a cask is prepared – 'toasted' to caramelise the wood sugar – and maintained is also important to The Balvenie's taste. Only coopers who have achieved the training, including a four-year apprenticeship, and who are based at the onsite cooperage are trusted with the barrels.

A key ingredient – perhaps the rarest of all – is the knowledge and nose of David Stewart MBE, the longest serving malt master in the Scotch whisky industry. David (pictured) started at The Balvenie in 1962 and over the years has honed his sixth sense of recognising when each cask will mature and what kind of expression it will give.