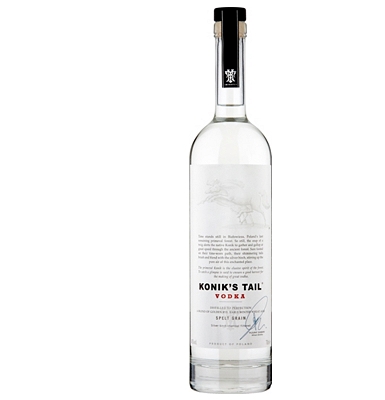 Rich, smooth vodka made from three grains (spelt, rye and winter wheat), represented by the three koniks (horses) on the label. It took artisan distiller Pleurat Shabani 20 years to fill the first bottle – find out more below.

Bottle at a glance

The tale of Konik's Tail

The story on the bottle describes the elusive konik horses that gallop through Białowieża, Poland's last remaining primeval forest, where their shimmering tails brush against silver birch trees, stirring up the pure air of the enchanted woods. To catch a glimpse of them is a sign of a good harvest... which makes great vodka.

The story in the bottle begins in mid-90s London where a young Kosovan, Pleurat Shabani, worked as a kitchen porter in Piccadilly Circus, then moved to collecting glasses and bartending in Soho. Over time he learned recipes for spirits, chatted with producers, judged tastings and soon realised he could make something a little different.

For the next 20 years, Pleurat literally took to the farms of Poland to find out exactly what makes truly excellent vodka. He slept in the fields, tested the effect of soil, climate and harvesting on different grains and came up with his recipe for Konik's Tail: a blend of three hand-malted grains filtered over silver birch charcoal, in keeping with a 600-year-old Polish method of vodka making.

The three grains each bring flavour, texture and character to the spirit. Ancient spelt (the happy grain) is nutty, earthy and full bodied, golden rye (the dancing grain) is peppery, it jumps on the tongue, and the smiling grain is early winter wheat, with its sweetness and long finish.